Three Rivers District Council has designated the Red Cross Centre as a site for future development with 6 dwellings to be built on the land.

This decision will remove a vital, well-used community space, which was built using funds raised directly from Croxley Green residents.

Three Rivers District Council own the land where the Centre is and it is completely their decision to build dwellings there instead. This cannot be allowed to happen.

In 2019 the Parish Council made an offer to take over the Centre to ensure that it remained open and available to Croxley Green residents, community groups and organisations. This has not been accepted.

Croxley Green needs spaces such as this where the community can come together to enable Croxley's great community spirit to thrive and grow.

Three Rivers District Council have not been open and transparent with Croxley Green residents over their plans for the Centre and the decision to mark this site for development is an affront and an insult to our community and must be stopped.

Please sign this petition to help support Croxley Green Parish Council in their efforts to take over the Centre to ensure that it remains open for our community. 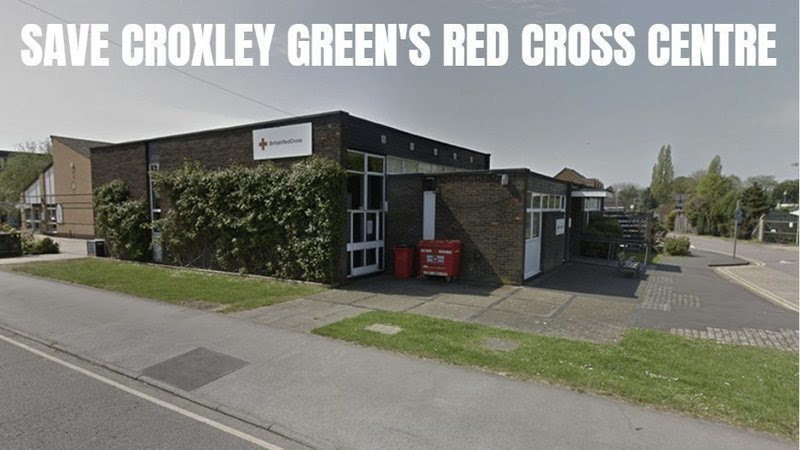 "In the recent local elections, the Croxley Liberal Democrat campaign literature included an explicit pledge that the candidates, and by implication, the party, were committed to ensuring that the Red Cross Centre was preserved for community use. Now, less than three weeks later, we learn that in the draft Three Rivers Local Plan the site has been designated for housing (six dwellings). Given that election pledge I do hope that you and the other Croxley councillors will oppose this.

In the approved Croxley Neighbourhood Plan the Centre is designated for community use – see pages 41/42. According to government guidance this should not be overridden other than in “material circumstances” although these are not defined. There are about 36,000 dwellings in Three Rivers. The government target for new dwellings is, I believe, 620 per year for 15 years i.e. another 9,300 dwellings. In neither context can 6 dwellings be considered “material”.

In 2019 Sarah Bedford, then leader of the Council, said that only 40% - 50% of the target for new dwellings could be met without “harming existing communities”. Sacrificing the Centre for six dwellings is a clear example of such harm.

The Red Cross has been in fundamental breach of the lease covenants, particularly as regards clause 14, for the last fifteen years or so. I know from my own discussions with Red Cross management between 2014 and 2017 that it has no intention of complying with those covenants. It now apparently wishes to terminate the lease early – it has 44 years to run. In those circumstances, I would expect the Red Cross to first effect any repairs necessary to bring the building to an acceptable standard in accordance with clauses 3 and 19 of the lease. Has this been agreed?

For around 40 years until c2005 when the Red Cross started to drastically cut support, the Centre was open six days a week providing a variety of services to the Croxley community, particularly the elderly. It could do so again, though not necessarily limited to the elderly, if under the control of the Parish Council which has offered to take over the building. Why not give the Council the chance?"

The Liberal Democrats have backtracked on the grassland management policy (also called ‘no-mow’). It was first put forward by Independent Cllr Alex Michaels and the Council agreed to turn 50% […]

As an ex-Lib Dem, who left the party and went on to serve as an Independent Councillor, Alex Michaels is supporting Chris at the election on 5th May 2022. “I […]

What is going to happen to the Red Cross Hall?

Chris Mitchell presented a petition signed by 555 local residents to Three Rivers District Council on 6th December 2021. An inaccurate statement from a Lib Dem Councillor was read out […]

Great news! The Sycamore Road development appeal has been dismissed. I congratulate all the residents for putting in so many objections. The Chair of the Management Association for the flats […]

New trees planted with better design, thanks to Green Party

Back in 2019 members of the Green Party met with a highways officer to draw attention to the neglect of newly planted trees. Tree ties, which are used to secure […]

The Killingdown Farm planning application for 160 dwellings adjacent to The Green Conservation Area has been upheld at appeal and therefore the development will go ahead. This is a disappointing […]

Chris performs as St George with the Croxley Mummers

Chris Mitchell will be playing St George in the Croxley Mummers’ St. George and the Dragon. It’s all good fun for a boo and a cheer! Sunday 19 December 2021 […]

On 24th November (7.30 pm) the Leisure, Environment and Community Committee at Three Rivers District Council will be considering the following “no-mow” motion: “to look for opportunities to cease mowing […]