Chris Mitchell, Green Party candidate for Dickinsons Ward, has succeeded in persuading the developers of Killingdown Farm in Croxley Green to improve energy saving in 160 proposed new homes. Installing heat pumps instead of mains gas connection will result in an energy saving of 43%, a vast improvement on current minimum building standards.

Chris has made two important representations at Three Rivers’ planning committee. On the second occasion he argued against the new site access from Little Green Lane. Access to the site is currently proposed from the west, using part of Little Green Lane which cuts across the Green. There would be two entrances and the existing carriageway would need to be widened. Chris is concerned about the impact this would have on the character of the much-loved Green:

“I will continue to oppose the proposed access from Little Green Lane. This option would be damaging the Green Conservation Area and will negatively impact the amenity of the village green.

“The removal of the well-established hedge along the edge of the site, which screens the development from the Green, would be a great loss.

“Three Rivers District Council should insist that the developer stick to the originally planned access route from Grove Crescent.”

In 2014, Chris spoke at the Public Inquiry as Parish Councillor to oppose taking Killingdown Farm out of the Green Belt. Chris worked alongside Croxley Green Resident’s Association and spoke on behalf of residents who have overwhelmingly been against the development from the start. Unfortunately, the inspector approved the site for development and thereby it was removed from the Green Belt. Chris will keep fighting for the best result possible:

“I fought to keep the site in the Green Belt in 2014 and I am now working to make sure the new homes achieve the best standards and minimize impact on local residents.

The Liberal Democrats supported the objections that I put forward at the Planning Committee on behalf of the Parish Council. After 6 months deliberations, the Council still hasn’t reached a decision.”

Chris led the Parish Council team that created the Croxley Green Neighbourhood Plan, identifying the policies and the 12 character areas which are the basis for protecting Croxley’s character and open spaces.

Chris is hoping to be the Green Party’s first candidate to win a seat at the District Council election on 6th May. One of his top priorities is to protect our Green Belt from unsustainable development and preserve our green spaces.

“As Councillor, I will challenge the targets and fight further development within the Green Belt.” 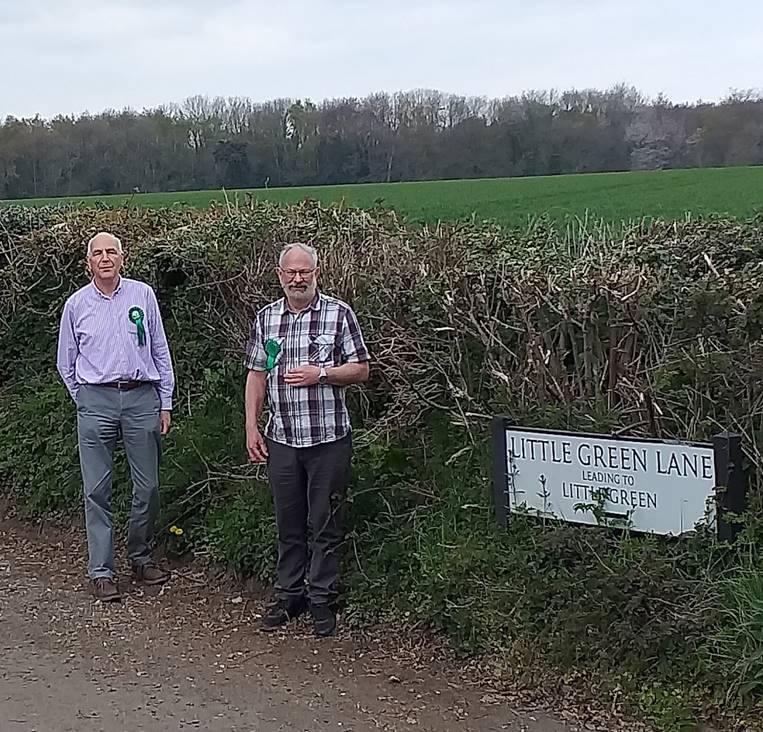 You can find the planning application with reference number: 20/1881/FUL

Killingdown Farm was historically operated as a dairy farm but the cows went many years ago and the farmer now mainly plants grains. The proposed housing development area consists of the paddocks nearest to the farm.  – the farm buildings are excluded.

The site allocations document proposed 120 to 140 dwellings on the whole site, and access from Grove Crescent (to the east of the site) through garage courts owned by Three Rivers.

The Sustainable Urban Drainage (SUDS) requirement is proposed to be delivered off site, on an adjacent field. That allows for an increase in dwellings within the development site to 160.

The Green Party is not happy about the proposal for drainage and flood mitigation measures to be provided offsite in the adjoining green belt. The planners are accepting this, so there is little point in further arguing this point, so provided that the area used is designed and managed in a way to encourage wildlife and protect biodiversity. This will turn the current arable field with negligible biodiversity value into a place for wildlife.

The Liberal Democrats have backtracked on the grassland management policy (also called ‘no-mow’). It was first put forward by Independent Cllr Alex Michaels and the Council agreed to turn 50% […]

As an ex-Lib Dem, who left the party and went on to serve as an Independent Councillor, Alex Michaels is supporting Chris at the election on 5th May 2022. “I […]

What is going to happen to the Red Cross Hall?

Chris Mitchell presented a petition signed by 555 local residents to Three Rivers District Council on 6th December 2021. An inaccurate statement from a Lib Dem Councillor was read out […]

Great news! The Sycamore Road development appeal has been dismissed. I congratulate all the residents for putting in so many objections. The Chair of the Management Association for the flats […]

New trees planted with better design, thanks to Green Party

Back in 2019 members of the Green Party met with a highways officer to draw attention to the neglect of newly planted trees. Tree ties, which are used to secure […]

The Killingdown Farm planning application for 160 dwellings adjacent to The Green Conservation Area has been upheld at appeal and therefore the development will go ahead. This is a disappointing […]

Chris performs as St George with the Croxley Mummers

Chris Mitchell will be playing St George in the Croxley Mummers’ St. George and the Dragon. It’s all good fun for a boo and a cheer! Sunday 19 December 2021 […]

On 24th November (7.30 pm) the Leisure, Environment and Community Committee at Three Rivers District Council will be considering the following “no-mow” motion: “to look for opportunities to cease mowing […]